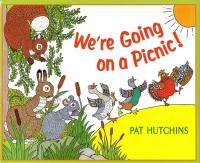 What Shall We Take on the Picnic?

We're Going on a Picnic

written and illustrated by Pat Hutchins

"What will you take on a picnic?" Brainstorm a list of items that might customarily be included as picnic fare. Don't forget tableware, condiments, and play equipment for activities after eating. Post the word list (or develop dictionary cards) for easy reference, perhaps on a red-and-white-checkered tablecloth as background.

Ask students to write about a silly picnic. Have them draw and label or write about a usual picnic item and something that begins with the same sound but would probably never be included on a picnic. "My picnic basket contains a cookie and a cuckoo clock." "I brought a pickle and a pachyderm to the picnic."

Getting ready for fractions with The Doorbell Rang

This short video describes how The Doorbell Rang and related activities can help young children get ready for working with fractions.

Part 1 in a series on developing phonemic awareness through picture books and related activities.