U.S. Constitution presented to the states for ratification

Members of the Constitutional Convention sign the U.S. Constitution in Philadelphia, Pennsylvania. The September 17th is now recognized as Citizenship Day the U.S. 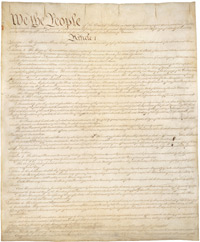 The Constitutional Convention was a meeting of delegates from the 13 states that had previously banded together to fight the American Revolution. It was held in Philadelphia, Pennsylvania between May 14 and September 17, 1787 for the purpose of revising the articles of Confederation.

The Convention, in fact, did more than revise the Articles of Confederation. The document they produced was a completely new framework of government with a strong federal legislature that represented both people (through the House of Representatives) and states (through the Senate). It specified a process (the electoral college) for election of a president that was also a combination of popular vote and state representation.

The Constitution enumerated the powers of Congress, the President, and the Supreme Court, establishing checks and balances that would limit the power of any one branch of the new government. It was a remarkable achievement.

…never before in the history of the world had the leaders of a country declared the existing government to be bankrupt, and the people, after debate, calmly elected delegates who proposed a solution, which, in turn, was debated up and down the country for nearly a year, and not a drop of blood was spilled.

from “Introduction to the Constitutional Convention” 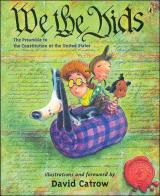 We the Kids: The Preamble to the Constitution of the United States

written and illustrated by David Catrow

A humorously illustrated preamble to the Constitution of the United States.