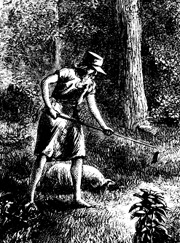 John Chapman was born and raised on a small farm in Massachusetts. As a boy, he was apprenticed to a local man who had apple orchards. Then, when he was 18 years old, Chapman headed west, settling in northeast Ohio. A few years later, his father brought the rest of the family to the area and Chapman set out on a mission to introduce apple trees to the frontier.

Chapman earned the name “Johnny Appleseed” as he established apple tree nurseries throughout Indiana, Ohio, and Illinois. He would plant nurseries or orchards and build fences around them to keep out livestock and other animals that would destroy the trees. He would then leave the nursery in the care of a neighbor and move on to a different area to create a new one.

Nursery managers sold trees on credit or for trade to local farmers or pioneers setting up new homesteads. Chapman took a share of the profits from each nursery he set up but wasn’t known to be aggressive about payments. Chapman returned to previously planted nurseries every year or so to tend the growing trees and collect earnings. Once he began traveling as Johnny Appleseed, he continued to wander from place to place for the rest of his life.

Chapman was a missionary, who believed that charity was essential to happiness and salvation. He would wear the worst of his clothes, giving the better clothing away or using it to barter. He died and is buried in Fort Wayne, Indiana, which holds a Johnny Appleseed Festival every fall.

Picture book adaptation of the tall tale of John Chapman and his apple-tree-planting adventures first seen in a Disney animated feature in 1948. 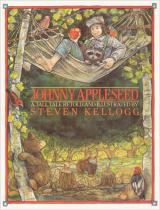 Fact and fiction surrounding the life of John Chapman, known as “Johnny Appleseed” are presented with Kellogg’s typically colorful and detailed illustrations.