The seasons officially change when the day and night are equal in length. In the Northern Hemisphere, autumn begins.

An equinox happens twice a year, when day and night are essentially the same length of time. It occurs when the earth’s equator is on the same plane with the center of the sun and the planet’s axis is pointed neither toward nor away from the sun.

The equinox is technically a specific moment in time, although it is common for the term to be used to refer to the day in which the equinox falls. In 2011, the September equinox occurs at approximately 9:05 UTC (5:05am EDT) on the 23rd. 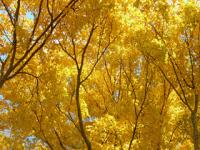 The Autumn Equinox: Celebrating the Harvest

Begins with a definition of the autumnal equinox and covers historical perspectives as well as current festivities in America and other countries around the world.