Noah Webster was an early American educator who was instrumental in establishing an "American" approach to education.  He is best remembered his An American Dictionary of the English Language. 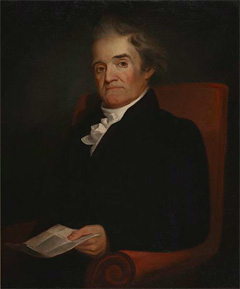 Noah Webster was an American educator who is best remembered his An American Dictionary of the English Language, which was first publish in 1828 and is still in print as the modern Merriam-Webster dictionary. He was instrumental in the establishing an American approach to education.

Webster was born in West Hartford, Connecticut. His parents valued education and is mother taught Webster and his sibling spelling, mathematics, and music. Beginning at age 6, Webster attended a run-down one-room primary school. The experience was decidedly negative and was a strong motivation for his effort later in life to improve elementary education.

He graduated from Yale in 1778 and studied law, passing the bar in 1781. At that time, it was difficult finding work as a lawyer, so he began writing newspaper articles and then founded a private school in New York. To guide his students, he created textbooks to teach spelling, grammar, and reading.   He did no include religious ideas or stories in the texts, and in doing so helped establish a secular approach to education in the new nation.

The speller, commonly referred to as the “Blue-Backed Speller” because of its blue cover, became a standard in American elementary schools for the next 100 years. Through successive editions, Webster slowly “Americanized” the spelling of many words. For example, in later editions of the speller, he dropped the '"u" from words like "favour" and "colour."

Webster published his first dictionary in 1806 and began work on the more comprehensive An American Dictionary of the English Language the following year. He took 20 years to finish it and in the process learned 26 different languages.