Four square miles of downtown Chicago was destroyed by a massive fire that burned for two days.

One of the most significant fires in the United States in the 19th century, the Great Chicago Fire started in the vicinity of a small barn owned by Patrick and Catherine O’Leary. The blaze started around 9 o’clock in the evening. The popular story is that a cow kicked over a lantern, but the first reporter to write that account later admitted that he had made it up.

The first alarm reached the fire department at 9:40pm, but the blaze had begun to quickly spread through the wooden-framed houses and sheds that were tightly packed into neighborhoods at that time. Hot, dry winds drove the flames to the northeast toward the heart of the city. 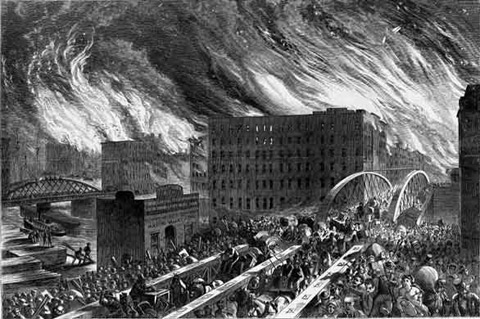 As the fire grew in size, it created superheated winds that began igniting rooftops and wooden structures that were not in contact with the existing flames. When the fire jumped the river and destroyed the city’s waterworks, there was nothing firefighters could do to stop the conflagration.

The fire burned itself out two days later, when the winds began to die down and a light rain began to fall. When the ashes had cooled down, it was estimated that over 2000 acres had been burned to the ground, leaving almost a third of the city's residents homeless. The damage was estimated at more that $220 million and the final death toll was between 200 and 300 people. 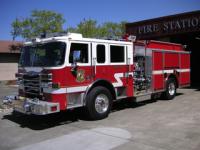