In the early morning on a sailor onboard the Pinta, one of three ships under the command of Christopher Columbus, spotted an island in the Bahamas.

Christopher Columbus was born in Genoa, Italy, in 1451. He took to the sea by the age of 14 and by the age of 33 he was a master mariner, traveling as far as Iceland and Guinea. In August 1492, with the backing of King Ferdinand and Queen Isabela, Columbus sailed west from Spain with three ships: the Niña, Pinta, and Santa Maria.  At 2a.m. on October 12, 1492, Rodrigo de Triana, a sailor onboard the Pinta, spotted land. It was an island in the chain of islands currently known as the Bahamas.

This island is very large and very level and has very green trees and many waters and a very large lake in the centre, without any mountain, and all so green that it is a pleasure to behold it.

Christopher Columbus, from the log of his first voyage to the New World

Columbus's voyage continued on to Cuba and then Hispaniola, where the Santa Maria sank off the coast and Columbus founded a small settlement called La Navidad. In January of the following year, Columbus set off on the return voayage, arriving back in Spain in the middle of March.  Columbus made 3 more voyages to the New World, visiting Jamaica, Dominica, Trinidad, and - during his final voyage - the Mosquito Coast in modern Nicaragua. 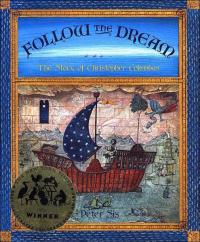 written and illustrated by Peter Sis

This is my picture book of choice for Columbus Day.  The fascinating illustrations, executed in a variety of media--oil, ink, watercolor, and gouache--show scenes from the explorer's life as well as some of the many imaginary creatures that populated the Europeans' picture of the outside world at that time.

Divide into three groups, one for each of Columbus' ships, the Nina, Pinta, and Santa Maria. Members of each group should use picture books, reference materials, and appropriate online resources to find pictures of and information about each ship. (This is a good activity to use with upper-grade partners) Display findings on bulletin board with blue waves.

Writing practice: copy the lines “He had three ships and left from Spain; he sailed through sunshine, wind, and rain.” and illustrate. Comprehension check: does the picture clearly represent the information of the text?

Using measurements given for one of the ships, mark an outline of the dimensions in chalk on the playground or on the grass. Assemble the number of persons to represent the crew members inside the outline (may need other classes or groups to help). Discuss the work the sailors needed to do each day and assign participants specific  “jobs”. (Hint: start with one or two workers and activities that require movement around the ship, then gradually add more to the mix.) Have participants write or draw about their experiences after discussion.