The Golden Spike, the final spike need to complete the Pacific Railroad, was hammered in at Promontory Point near Ogden, Utah.

The Golden Spike, the final spike need to complete the Pacific Railroad, was hammered in at Promontory Point near Ogden, Utah.

The Pacific Railroad Act was signed by President Abraham Lincoln July 1, 1862, and decreed that a railroad should be built to cross the continent, connecting Omaha, Nebraska with Sacramento, California. It took more than a year to assemble the manpower to take up the task. Then, the Union Pacific and the Central Pacific Railroads raced toward each, crossing dry prairie and high mountains, fighting extreme weather and hostile Native Americans. 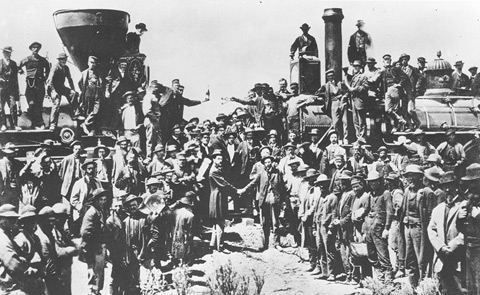 By Congressional degree, the two railways were to meet in a flat area near the town of Ogden, Utah. On the big day, two locomotives pulling cars filled with dignitaries – one from the east and one from the west – met for a ceremony. The rails were secured to the final tie by two silver, one silver and gold, and one gold spike.

The completion of the first transcontinental railroad was a remarkable engineering achievement. It also marked the end of an era for the western frontier. The changes brought by the railroads had a profound affect on commerce and settlement.

Dramatic illustrations and simple rhyming text depict the race to construct the transcontinental railroad from Omaha, Nebraska, to Sacramento, California.

Ten Mile Day and the Building of the Transcontinental Railroad

In the context of building the entire Transcontinental Railroad, a detailed account of April 28, 1869, when--as the result of a $10,000 wager--Central Pacific crews laid a record- setting ten miles of track.

Death of the Iron Horse

written and illustrated by Paul Goble

Powerful words and pictures tell the true story of August 7, 1867 -- the only time an "Iron Horse" was derailed by Native Americans. 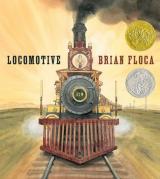 written and illustrated by Brian Floca

A family's trip by train from Omaha to Sacramento in 1869. Caldecott-winning illustrations and a wealth of historical information about the Transcontinental Railroad.

May 10, 1869 the Union and Central Pacific Railroads joined their rails at Promontory Summit, Utah Territory and forged the destiny of a nation. Golden Spike National Historic Site shares the stories of the people and settings that define the completion of the first Transcontinental Railroad.