The first U.S. government-funded exploration of the western wilderness – primarily covering the area added to the United States through the Louisiana Purchase.

The first U.S. government-funded exploration of the western wilderness – primarily covering the area added to the United States through the Louisiana Purchase.

The expedition, led Meriwether Lewis and William Clark, took over two years to complete. The party of about 45 men left from St. Louis on May 14, 1804. They traveled up the Missouri and Maria’s Rivers, crossed the Rocky Mountains in what is now Montana and Idaho, and followed the Snake and Columbia Rivers to the Pacific Ocean. On the return voyage, the party split up for a time, seeking a shorter route through the mountains.

While expedition did get into a few conflicts, it made peaceful contact with most of the native America tribes it encountered including the people of the Mandan, Nez Perecé, and Shoshoi. Sacagawea, a Shononi woman married to a French-Canadiann trapper joined the group and was instrumental in helping the party trade with tribes it met along the journey. 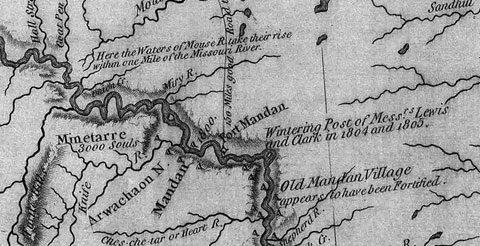 Portion of the map created by Lewis and Clark based on their observations during the expedition.

The journals kept by Lewis and Clark throughout the expedition contained detailed observations of the natural environment and the plants and animals they encountered. While they failed to discover an easy route to Pacific, the Lewis and Clark expedition allowed the U.S to claim the Oregon territory which opened up the settlement of the West.