The Homestead Act encouraged settlement of the western half of the United States by providing a low cost way for families to acquire land for small farms.

The Homestead Act encouraged settlement of the western half of the United States by providing a low cost way for families to acquire land for small farms. 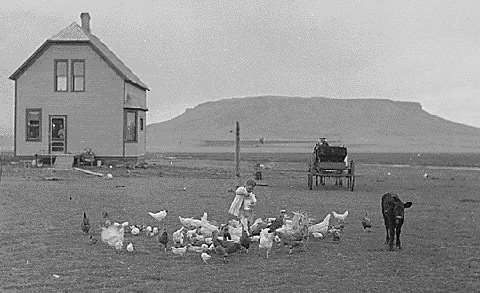 The law allowed any person over 21, who was head of a family and a US citizen (or intended to become one), to claim the title to 160 acres of public land if they would live on the land for 5 years and improve it. The sponsors of the legislation believed that the land itself had no value until someone improved it and that those who did the improving should not have to pay for it.

Unfortunately, homesteading in the region proved very challenging, and the overall impact of the Act was a disappointment for it supporters. Other laws of the time granted most of the best land to railroad companies and the states. The remaining land was hard to convert to farms since water was scarce in many places and the equipment to farm the land was to expensive to operate on the fairly small homesteads.

Some historians have estimated that less than 20% of all public land that passed into private hands during the years covered by the act was actually homesteaded. Still, the act attracted thousands of settlers to the region and led to the creation of new homes for about half-million families before 1900.