The Brooklyn Bridge is Completed

The Brooklyn Bridge was the largest suspension bridge in the world when it was completed in 1883. 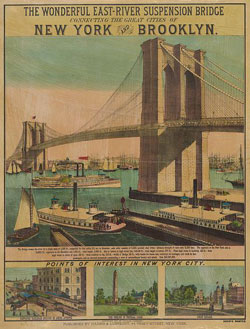 The Brooklyn Bridge was the largest suspension bridge in the world when it was completed in 1883.

One of the most easily recognized bridges in the world, the Brooklyn Bridge connects the Brooklyn and Manhattan boroughs of New York City by crossing the East River. It is 1,595 feet long. It has six traffic lanes, plus a pedestrian walkway for people walking of riding bicycles.

The roadway is suspended from steel cables that are nearly 16 inches thick. The cables are attached to 275-foot towers on each side of the bridge. It was designed by engineer John Roebling, who was injured and soon died during surveying work for the bridge. His son Washington took over the project but was also suffered a paralyzing injury during the early stages of construction. Washingon's wife Emily Roebling was instrumental in supervising the remaining construction.

When it first opened, it was dubbed the “eighth wonder of the world”. In 1964, the bridge was declared a national historic site.