The return of the swallows takes place each year at the Mission San Juan Capistano, in California on March 19th, St. Joseph's Day.

The return of the swallows takes place each year at the Mission San Juan Capistano, in California on March 19th, St. Joseph's Day.

Each year a few scout swallows precede the main flock by several days; not long after dawn on St. Joseph's Day, many, many of the little birds begin to arrive and start rebuilding their mud nests.

The Cliff Swallow is a migratory bird that spends its winters in Goya, Argentina, but makes the 6,000-mile trek north to the American Southwest in springtime. According to legend the birds first took refuge at the Mission centuries ago when an irate innkeeper began destroying their mud nests.

The Mission's location near two rivers made it an ideal location for the swallows to nest, as there was a constant supply of the insects on which they feed, and the young birds are well-protected inside the ruins of the old stone church.

During the early 1940s a popular song, "When The Swallows Come Back to Capistrano," encouraged radio fans worldwide to come to San Juan Capistrano for the annual return of the swallows -- in hopes of finding their true love.

Each year the Fiesta de las Golondrinas is held in the City of San Juan Capistrano. It is a week-long celebration of this unique migratory event culminated by the Swallows Day Parade and Mercado, street fair. 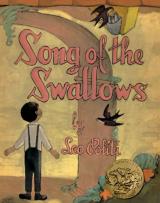 Song of the Swallows

written and illustrated by Leo Politi

Sad when the swallows leave for the winter, young Juan prepares to welcome them back to San Juan Capistrano on St. Joseph's Day the next spring.