A massive explosion occurred in Siberia, near the Podkamennaya Tunguska River. It was likely caused by a meteor over 100 feet across exploding 4-6 miles above the ground.

At 7:17am local time, a huge explosion occurred in the lower atmosphere above Siberia. Scientists estimate that the blast was likely equivalent to a 15-megaton nuclear explosion.

The explosion knocked people down and shattered windows more than 50 miles away. The forest for 20 miles around the blast was completely flattened; the burnt and charred trees were knocked down in a pattern radiating from a central point. Witnesses reported seeing a huge black cloud and hearing a tremendous roar. The sound, described as resembling a cannon blast or shower of heavy stones, was heard 300 miles from the blast. 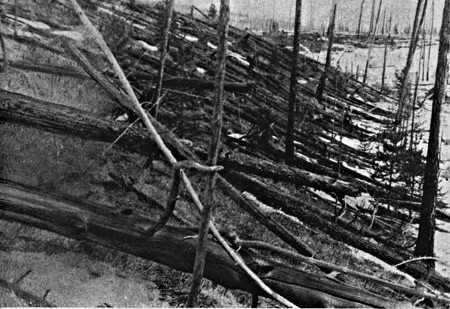 People in a remote village around 200 miles from the explosion reported seeing a “ball of fire” with an iridescent tail streaking across the morning sky. As it approached the ground, it seemed to be pulverized. Then appeared a black cloud broken by a “forked tongue of flame.” Many thought it was the end of the world.

Given the remote area of the explosion, no official investigation of the event was done until March, 1927 – nearly 20 years later. Scientists took pictures and surveyed the damage, but did not recover any fragments of meteorite rock. Today, scientists believe the explosion was an airburst from meteor (most likely) or comet fragment.