Declaration of Independence is adopted

The Declaration of Independence asserted American colonies were no longer governed by Great Britain. 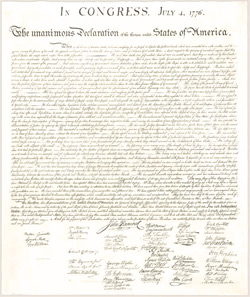 The Second Continental Congress adopted the Declaration of Independence, asserting that the American colonies were independent from Great Britain.

At a meeting of representatives from the 13 British colonies in North America, Richard Henry Lee of Virginia moved that “These United Colonies are, and of right ought to be, free and independent states.” A committee of five men was charged with writing up a document that would officially declare this independence and proclaim to the world the reasons why the colonies needed to break away from Great Britain.

The initial draft was written by Thomas Jefferson and took two weeks to produce. A few changes were made by the committee, which included John Adams, Benjamin Franklin, Roger Sherman, and Robert Livingston. The final draft was presented to the full congress and debated for nearly three days. On July 4, 1776, the document was approved.

The Declaration of Independence has two parts. The first describes the colonists’ beliefs about democracy – essential “truths” about people and their relationship with their government. The second part lists in detail the grievances that the people of the colonies had with the British government, in particular, the King.