Benjamin Franklin was printer, author, scientist, stateman, and Founding Father to the United States of America. 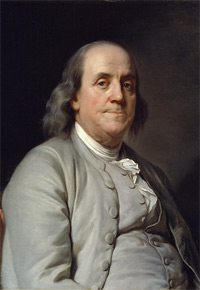 Benjamin Franklin was born in Boston in 1706. He attended school for only 2 years, but was a voracious reader.   At the age of 12, he became a printer’s apprentice to his brother James, who, 3 years later, started The New-England Courant, the first independent newspaper in the colonies.

Franklin adopted the pseudonym of a middle-aged widow named “Mrs. Silence Dogood” to write several letters to the paper. Even though the letters caused quite a stir, Franklin’s brother was very unhappy with him when the rouse was discovered.

At age 17, Franklin ran away to Pennsylvania. For several years he worked as a printer’s assistant, typesetter, clerk, and shopkeeper. In 1728, he and a partner set up a new printing house and soon started publishing The Pennsylvania Gazette. In 1733, he began publishing Poor Richard’s Almanack.

Franklin was actively engaged in public affairs as early as 1736 when he help create one of the first volunteer fire companies in the colonies. In later years, he set up a college, organized the Pennsylvania Militia, and helped establish the first hospital in (what would become) the United States. He had many different interests and was an avid scientist and inventor. He is known to have created the lightning rod, Franklin stove, and bifocal glasses, among many other inventions.  He gained world fame with his work on electricity.

He became active in politics in the 1740’s and served in several key positions at home and abroad. These included: Speaker of the Pennsylvania House; agent to the Crown for Georgia, New Jersey, Massachusetts, and Pennsylvania; delegate to the Second Continental Congress; United States Postmaster General; the first U.S. Ambassador to France; and delegate to the Philadelphia Convention. He was the only Founding Father to sign the Declaration of Independence, The Treaty of Paris, the Treaty of Alliance with France, and the United States Constitution.

Franklin died on April 17, 1790. He was 84. He is buried with his common law wife in Christ Church Burial Ground in Philadelphia.