Rosa Parks was a life-long activist whose refusal to give up her seat on a segregated bus was a catalyzing event in the U.S. Civil Rights Movement.

Rosa Louise McCauley was born in Tuskegee, Alabama.  When her parents separated, she and her mother moved to her maternal grandparents' farm just outside of Montgomery.  As a girl, she remembered walking to school and being passed by busses of white children being driven to their new school.

In 1932, she married Raymond Parks, who was active in National Association for the Advancement of Colored People (NAACP).  With his encouragement, she finished her high school studies and succeeding in registering to vote.  She worked at various jobs including housekeeper and seamstress.  Parks became active in the Civil Rights Movement in 1943 and was elected secretary for the Montgomery Chapter of the NAACP.

On December 1, 1955, Parks boarded the Cleveland Avenue bus in downtown Montgomery.  She paid her fare and took a seat in the first row of the "colored" section in the back.  When the "whites-only" section filled, the driver told her to move so that white passengers could sit in that row.  She refused, and was arrested.

Parks remained an activist for most of her life, promoting civil rights, desegregation of housing, and freedom for political prisoners.  She died at home in Detroit of natural causes at age 93. Her remains were allowed to lie in honor in the rotunda of the U.S. Capitol building.  She was the first woman and only the second black person to be so honored. 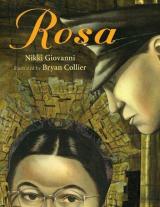 A beautiful celebration of Rosa Parks, not as the tired black woman who refused to give up her bus seat but a strong woman, happy at home and at work, politically aware and part of a dynamic activist community.