The final major and arguably the most destructive of a series earthquakes in the central United States in 1811-1812.

In the early morning hours of February 7, 1812, a powerful earthquake struck the central United States.  It destroyed the town of New Madrid, in southeastern Missouri, which was near its epicenter, but buildings were damaged as far away as Cincinnati, Ohio.  The total area affected by the quake was roughly 8 times that impacted by the San Francisco quake in 1906.

Waterfalls appeared in the Mississippi River as subsisting ground shifted the riverbed; huge waves moving upstream made some observers believe the river had reversed direction.  Geysers blew coal and sand tens of feet into the air.  In an area of western Tennessee, the ground suddenly dropped 1.5 to 6 meters (5 to 19 feet), creating Reelfoot Lake.

Geologist have found evidence that there have been several large earthquakes of the same magnitude or greater in this region (called the New Madrid seismic zone) over the last 4500 years.  Although there is no evidence that a quake is immanent, the U.S. Federal Emergency Management Agency has warned that a quake the size and location of the New Madrid today could result catastrophic damage throughout the Mississippi River basin. 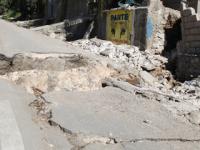 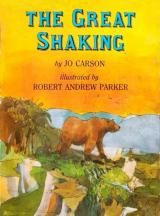 A bear who was there describes three earthquakes in Missouri, near the New Madrid Fault, and their aftermath in 1811 and 1812.