This law provides protection for plants and animals  that are endangered or threatened due to loss of habitat, environmental pollution, or other factors related to human activity.

"Nothing is more priceless and more worthy of preservation than the rich array of animal life with which our country has been blessed."

Approximately 1,370 of the species listed in the act are found in part or entirely in the U.S. and its waters.  Some species like grizzly bears, whooping cranes, and Indian paintbrushes (a flower) are fairly well known, but most are so rare or difficult to film that known only to specialists or people who live in the immediate vacinity.

The law has been amended several times since 1973, however, its core principle remains the same.  Once a species is listed as endangered or threatened, special rules on development and land use are applied to an area designated as "critical habit" for the plant or animal.  Permits and recovery plans are developed to prevent the species' extinction and to help them recover and maintain stable populations.

Many different nations around the world have similar laws to protect plants and animals that are threatened or endangered within their territories. 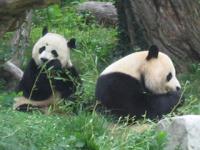 written and illustrated by David McLimans

Bold and playful illustrations transform each letter into a work of art graphically rendered with animal characteristics.