A violent volcanic eruption buried the Roman cities of Pompeii and Herculaneum. 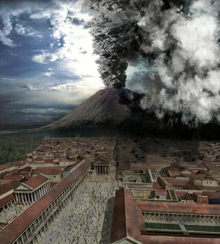 Mt. Vesuvius is a conical volcano rising above the Bay of Naples in south-east Italy. It is classified as a stratovolcano because it is built up of layers of hardened lava, volcanic ash, and pumice. This class of volcano is known to produce very explosive eruptions.

The most famous eruption of Mt. Vesuvius occurred in 79AD, which completely destroyed the cities of Pompeii and Herculaneum – literally wiped them off the map.  This is also one of the earliest volcanic eruptions for which scientists and historians have found a detailed written description.

It began around noon on August 24 with an explosion that set a huge column of ash into the upper atmosphere. Pliny the Younger, a student naturalist about 20 miles away from the eruption, described it detail.

A cloud… was ascending, the appearance of which I cannot give you a more exact description of than by likening it to that of a pine tree, for it shot up to a great height in the form of a very tall trunk, which spread itself out at the top into a sort of branches…

Some people attempted to flee the area, while others attempted rescues. Some took shelter thinking they could wait out the eruption. Many of these were killed by collapsing roofs or asphyxiated by the thick clouds of ash. The following night or early the next morning pyroclastic flows of superheated gas and ash rolled down the sides of the mountain, incinerating and burying anyone left in the area.

The town of Pompeii was buried under 10 feet of ash, while a 75-foot-deep layer of ash covered the town of Herculaneum. The ruins of the cities were discovered in 1700’s. Excavations have revealed several hundred skeletons or voids in the ash were people had been buried. In Herculaneum, many of the buildings remained intact. Excavation and study of these cities have provided valuable insight into the daily life of people in the Roman Empire at the time of the eruption.