Two-time winner of the Caldecott Honor Medal, author-illustrator Donald Crews has been creating picture books for over 40 years.

Author/illustrator Donald Crews was born in Newark, New Jersey in 1938. Interested in art from an early age, he attended attended Cooper Union School for the Advancement of Science and Art in New York City.

Crews began building his art portfolio while serving in the American military in Germany. He designed his first children’s book, We Read: A to Z, at that time. It was published in 1967. A year later, he published Ten Black Dots.

In and interview for an 1998 article in African American Review Crews said:

All of my books are about real events, and they're only segments of those real events, a small portion of them and trying to tell a brief story about that part. Just the involvement with the book is what I want people to experience, and taking a look at the way I tell a story and hopefully finding pleasure in it. 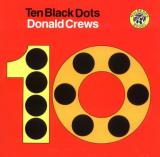 written and illustrated by Donald Crews

A counting book, a book of simple rhymes, and a book of everyday objects.

written and illustrated by Donald Crews

This Caldecott Honor book has a simple description of different types of freight cars on a train moving down the track.