Thomas Jefferson was the third President of the United States and author of the Declaration of Independence. 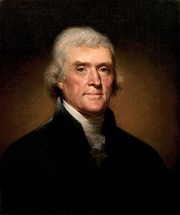 Thomas Jefferson was the third President of the United States and author of the Declaration of Independence.

Thomas Jefferson was the third of ten children in a prominent, wealthy family in Virginia. He was curious, with an interest in many different fields of study, and graduated from the College of William & Mary at age 19.

He practiced law and was active in politics and diplomacy from 1769 when he served in the Virginia House Burgesses until 1809 when he ostensibly retired following his second term as President of the United States. During that time he also served the public as Governor of Virginia, member of Congress, Secretary of State (for George Washington), and Vice President (to John Adams).

As President, he was responsible for making the Louisiana Purchase and commissioning the Lewis & Clark expedition to map the new territory.

After leaving office, he founded the University of Virginia, which is one the three things he mentioned in the epitaph he wrote for himself: 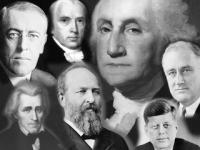 by David A. Adler, illustrated by John & Alexandra Wallner

Shares the life and achievements of this architect, lawyer, president, and author of the Declaration of Independence. 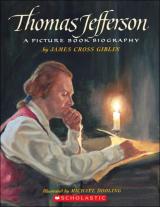 Dramatic oil paintings illustrate this biography of our third President, a man of many talents.