The Worst Band in the Universe 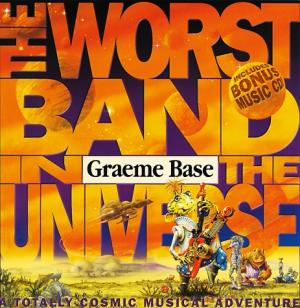 written and illustrated by Graeme Base

The cosmic tale of Sprocc, a young Splingtwanger-player who leaves his home planet, Blipp, in search of musical freedom and finds friends and adventure of truly intergalactic proportions.

A young groob named Sprocc loves to play his splingtwanger (a guitar-like instrument). On his homeworld, planet Blipp, creativity is stifled and only the traditional music passed down from many generations is allowed. This stagnant environment becomes too much for the artistic Sprocc and he improvises his own music which nearly gets him exiled. He decides "life on Blipp for him was through” and takes the SpaceBus to an urban planet where he meets a variety of aliens. There he makes some new friends and learns of a competition for the "Worst Band in the Universe". (A creative band would be considered bad and the most creative band considered the "Worst".) However, after winning the competition, Sprocc learns that the contest is a sham run by the same imperial authorities stifling music creativity; he and his band mates are sent in exile to the junkyard planet, Wastedump B19, where Sprocc meets another exile called Skat. After a persistent effort spearheaded by Sprocc the exiles build ships that are powered by music and return to Blipp. The music exiles attempt to perform a grand show but are eventually stopped by the Musical Inquisitor and his diabolical hi-fi system/rocket ship. However, the elder leader of Blipp comes out and rallies everyone: “Arise!” she cried. “The hour has come. Together we must fight. Let Ancient Song and Innovations finally unite!”. After the enemies of creativity are defeated and the Temple of Tunes destroyed the Eldest One calls for celebration because “Repression has been vanquished by the forces of creation - The armor of Tradition and the sword of Innovation.”

The story is told in rhythmic couplets and uses extraordinary vocabulary. The wildly imaginative illustrations are detailed scenes of science fiction/fantasy mayhem. They feature mottled, rubbery-looking aliens (bearing futuristic instruments) in surrealistic surroundings, vividly presented in shades of orange, green, purple, and blue. The two-page spread of the actual contest is truly out-of-this-world!

The book comes with a bonus CD that covers some of the music performed at the "worst band in the universe competition". All the music was written and performed by Graeme Base. Selected lyrics are printed on the back endpapers.  “There’s a song in every story/There’s a rhythm in every rhyme…”

The smooth, natural rhythm of the verses makes it a delight to read aloud although I recommend practice on the names and some of the imaginative vocabulary. The story can lead to a variety of discussions and learning projects: creativity, music, friendship, self esteem, science fiction writing, fantasy paintings, just to name a few areas of interest. Some reviewers have questioned the appropriateness for a picture book audience but I think the story has something for everyone. I have used the book and music successfully from kindergarten classes through college groups, perhaps because I so thoroughly enjoy it. 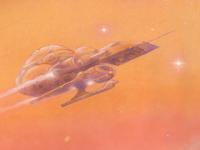 After listening to selections from the CD that comes with the book The Worst Band in the Universe spend some time thinking and talking about the lyrics and music. Make lists of things liked or disliked about it.

Listen to and discuss different versions of the same song done by various artists:

IMPORTANT:  Always reinforce the idea that there are no right or wrong answers to encourage honest responses. You may find that what one person likes about the music is exactly the same thing another dislikes.

Be Your Own Blippian Band

Help children design and build their own special musical instrument, giving it a Blippian name.  It will help to have several different materials available for children to experiment with making sounds.  This activity provides an opportunity to talk about the science of sound.

Use available instruments, whether regular, rhythm band, or student-constructed, and put together a band. Have members chose Blippian stage names and a Blippian band name. Older students may want to divide into small ensembles and vie for a "Worst Band" award.  This could be a lip-syncing contest as easily as a "real" music contest.

Listen to recordings played by different stringed instruments such as the guitar, banjo, ukelele, harp, piano, cello, mandolin, and violin.  Compare and contrast the sounds of the different instuments.  If possible, find songs or pieces of music performed using two different instruments and compare the sounds.  For example, The Beatles song “While My Guitar Gently Weeps” is a guitar favorite. But versions have been done by Santana (with Indie Arie & Yo-Yo Ma) and Jake Shimabukuro on the ukelele.