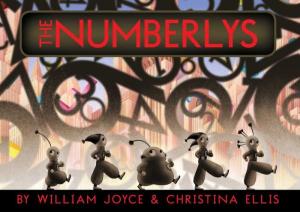 written and illustrated by William Joyce and Christina Ellis

Once upon a time there was no alphabet, only numbers…  Life was orderly. Dull as gray paint. Very…numberly. But five friends weren’t willing to accept that this was all there could be and set out to find MORE.

In this large, mostly vertical picture book, the Numberlys are tiny alien-looking robot-like creatures living in a futuristic metropolis. Its buildings appear especially tall as the pages here often rotate the layout. The spare text with many wordless pages tells of a time when there were only numbers and no alphabet. Five friends are unhappy with the sameness and set about to find MORE. As they struggle with giant cogs and gears the machinery begins to break up numbers, using the parts to build all 26 letters in alphabetical order. The letters also brings color to their world. And words! “As letters formed words, the world was filled with amazements” like jellybeans and pizza and names for people.

Part Art Deco, part Steampunk, the interesting-looking characters work with inventive machines, designs, and arrangements. The first illustrations show a believable futuristic city in shades of brownish gray before the wild colors take over. The author has dedicated the book to the memory of Fritz Lang whose classic 1927 science fiction film “Metropolis” featured architecture similar to the city where the Numberlys live.

The front and back end pages are a sort of story summary. The front has a spread of regimented colorless characters and designs, while in the back individual characters are sprawled in snoozing groups in the dark blue night with a bright yellow moon shining over them. Over the colorful book cover is a transparent jacket covered with black letters and numbers with the five friends marching across, prompting both interest and expectation.

Probably not a first choice for those just learning their alphabet letters but great for reinforcement, review, and fun with letters along the way to mastery.

Numberlys was developed from an award-winning story App from William Joyce and Moonbot Studios, presenting a fanciful depiction of the origins of the alphabet

The Worst Food Ever!

"There weren’t any jellybeans or pizza. Only 00267, which was thick and gray and gloopy, and 00268, which was thicker and grayer and, well . . . gloopier." The facial expressions on the faces of the five friends and the multitude of Numberlys behind them seem to indicate repugnance for their food.

What was the worst food you have ever been expected to eat? Draw and tell or write about the experience. Use descriptive words and involve all the senses. How did it taste? What did it smell like? Tell about the colors and textures. Add interesting details: Where were you? Who made you eat it? It was so bad the dog wouldn’t even eat it . . . and he’ll eat anything! Have each person assign a five digit number to their food (its real name in parentheses) as their title. For a little extra math practice display the pictures and writings in numerical order.

As a group prewriting activity we make a list of adjectives that might be appropriate for this assignment. (I save this list and use it to prompt a discussion of words that mean the opposite when we do a writing about the most delicious food we have ever tasted.)