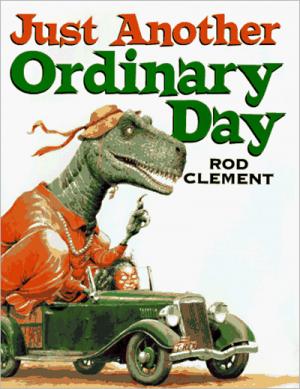 written and illustrated by Rod Clement

Read about Amanda's ordinary day--from the genie's gong that awakens her to evening snuggle time with her lion Fluffy.

A ho hum text about Amanda's run-of-the-mill school day is in riotous contrast with large-scale drawings that reveal a schoolmate is an alien, her science teacher is a giant insect, her mom's off-road vehicle is an elephant, and her elderly neighbor is a Tyrannosaurus rex.

Both books display the power of imagination. The illustrations clearly show that Amanda's day is anything but Just Another Ordinary Day. Dinosaurs, space aliens, pirate ships, and adult-size insects are just some of the imaginative characters springing from a rather humdrum text.  Poor Judy has to stay in at recess to write a suitable story. At first she has nothing to say but then comes the terrible storm, the violent volcano, and the children who cry out to be saved from the giant iguana. Her vivid imagination allows Judy and the Volcano a successful ending.

Incidentally, both books and authors are from Australia.