The Jolly Postman or Other People’s Letters 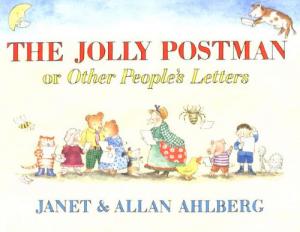 written and illustrated by Janet and Alla Ahlberg

A cheerful mail carrier goes from home to home in a fairy-tale kingdom, delivering letters to characters from traditional children's stories.

This interactive picture book, first published in Britain, uses inventive references to characters from well-known, traditional children's stories. A postman on a bicycle is bringing mail to characters such as the Three Bears, Cinderella, the wolf from Red Riding Hood, and the giant from Jack and the Beanstalk. He often stops for tea and conversation with the recipients of the envelopes.

The rhyming text moves along quickly. Following each sheet of verse and illustration, there is one shaped like an envelope and containing one of the postman's deliveries. These mailings include include letters, cards, games, money, and a tiny book. The reader should take the time to read the contents of the envelope before moving on.

The illustrations are delightful and crammed full of clever details. For example, the wicked witch of "Hansel and Gretel" fame receives a circular from Hobgoblin Supplies Ltd. which advertises such appealing products as Little Boy Pie Mix.

Readers are sure to enjoy the book more if they are familiar with the characters and stories being used as the basis for the letters.

Ask each reader to prepare their own communication with a nursery rhyme character. For some students it may be helpful to refresh their memories of various Mother Goose or nursery rhymes. There might also be a discussion of the significant portion of the rhyme that one might want to write about. A good source of a variety of these verses is our Nursery Rhymes theme.

These are some examples:

Communications could be illustrated appropriately and displayed surrounding a mailbox on a large bulletin board.