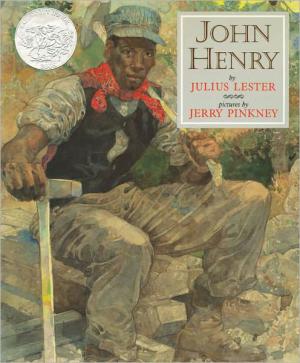 With his two sledgehammers pulverizing boulders, John Henry races a steam drill tunneling through a mountain in a deadly contest between man and machine.

Based on several well-known versions of an African American folk ballad, Lester's tale is true to the essence of the steel-driving man; yet, it allows room for touches of whimsy and even includes some contemporary references that tie the hero to our own times. Told with just a trace of dialect, the story moves along briskly toward the climax. Its moral message of the importance of a well-lived life is clearly stated, and the ending is uplifting. Pinkney's marvelous watercolors, abundantly rich in detail, convey both the superior strength and the warm sense of humanity that make John Henry perhaps a more down-to-earth character than some other tall-tale figures. The paintings' muted earth tones add a realistic touch to the text, bringing this John Henry alive.  (review from the School Library Journal)

The combination of dynamic tall tale language and the powerful watercolor paintings set this picture book apart from other versions of the legend of John Henry.

Who Was John Henry?

John Henry is one of our most enduring folk heroes. His story speaks to the common man and has inspired songs, books, films, artwork, festivals, and theatrical productions. In 1996, the U.S. Postal Service issued a John Henry postage stamp at a special ceremony in Talcott, West Virginia, near the Big Bend Tunnel. 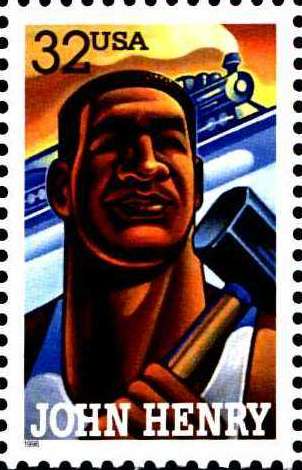 Generations of folklorists and historians have tried to prove John Henry really existed and to place the alleged contest against the mechanical steam drill. Early research pointed to the Big Bend Tunnel in Summers County, West Virginia, as the site of John Henry’s deed. But Alabama, Georgia, and Virginia also have laid claim to the John Henry legend.

One of the most complete looks at John Henry,  the man and the legend, can be found in the West Virginia Encyclopedia.