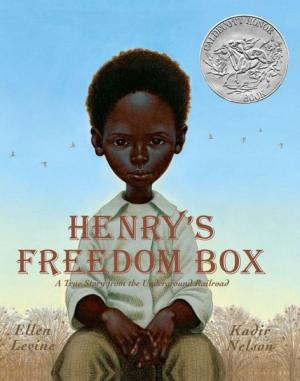 This Caldecott Honor book retells the true story of Henry Brown, a slave who mailed himself to freedom.

When just a small boy, Henry Brown was seperated from his family and sent as a slave to work in a tobacco factory. He eventually married and had 3 children. After his own family was sold away at the slave market, he enlisted the help of an abolitionist doctor and mailed himself in a wooden crate "to a place where there are no slaves!" He traveled by horse-drawn cart, steamboat and train before his box was delivered to the Philadelphia address of the doctor's friends. Brightly colored illustrations bring the story to life with power and visual insights. These Caldecott Honor award paintings were done with crosshatched pencil lines layered with watercolors and oil paints.

Paintings for this book were inspired by an antique lithograph of Henry "Box" Brown, created by Samuel Roswe in 1850 as a fundraiser for the anti-slavery movement.

The story ends with a reimagining of the lithograph that inspired it, in which Henry Brown emerges from his unhappy confinement and smiles upon his arrival in a comfortable Pennsylvania parlor.

Travels in a Box

Henry "Box" Brown was a 19th century Virginia slave who escaped to freedom by having himself mailed to Philadelphia abolitionists in a wooden crate. Read the report of this adventure in Narrative of the Life of Henry Box Brown, Written by Himself: Electronic Edition. Using the dimensions given in the report construct a box of the same dimensions.

The box is in the clear three feet one inch long, two feet six inches deep, and two feet wide. It was a regular old store box such as you see in Pearl-street;--it was grooved at the joints and braced at the ends, leaving but the very slightest crevice to admit the air.

Discuss various comfort and safety factors. Students may want to try fitting inside the box themselves and then think about how it would be for a man 5 ft. 8 inches tall and weighing 200 pounds.

Nothing saved him from suffocation but the free use of water--a quantity of which he took in with him in a beef's bladder, and with which he bathed his face--and the constant fanning of himself with his hat. He fanned himself unremittingly all the time. The "this side up" on the box was not regarded, and he was twice put with his head downward, resting with his back against the end of the box, his feet braced against the other,--the first time he succeeded in shifting his position; but the second time was on board a steam boat, where people were sitting and standing about the box, and where any motions inside would have been overheard and have led to discovery; he was therefore obliged to keep his position for twenty miles.

Make a map of the journey, placing pictures on the map of the types of conveyance used appropriate for each part of the trip. Discuss similarities and differences in the dangers Henry faced on each part of his trip.