The Grey Lady and the Strawberry Snatcher 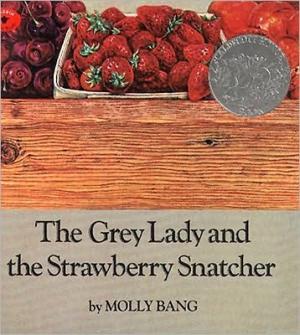 An older lady dressed in grey buys some strawberries but a strange, long fingered blue creature tries to steal them. She escapes in fantastic and marvelously improbable ways and frustrates her silent stalker at every turn.

Completely wordless, except for the title, this Caldecott Honor-winning book depicts an old woman clothed in grey chased by a long fingered blue imp who is after her strawberries. She leads him down mysterious hallways, on a wild bus ride, and into the woodsy swamp where she disappears into a grey-shadowed landscape. As she eludes him at every turn the Strawberry Snatcher becomes totally frustrated and decides to settle for blackberries instead.

The illustrations, bold full-color paintings and vivid collages, are surreal yet reality-based. Many times, there are before-and-after pictures of an occurrence without the actual occurrence being shown so that readers must decide what has happened. Several times more than one image of the characters is shown on the same spread. Less mature readers may need help seeing this as a technique to show action and that there is only one of each character in the book. There are delicious details for careful lookers: the mushrooms that grow up in the footsteps of the Strawberry Snatcher, for instance. The artist's use of figure/ground manipulation is central to the plot and can be used as an introduction to other art activities using negative and positive space.

A special note from the author’s website:
Ursula Nordstrom, one of the great editors of children's books, was very critical of the first manuscript and told the author:

"This is in full color and you are unknown, so it's impossible. You have an old woman running around in the woods, and children don't relate to an old woman as a protagonist. The characters are very peculiar-looking. And to top it off, this has no words, so nobody will know what to do with it. Why don't you go home and illustrate some folktales?"

It was several years before there was any interest in publishing it but finally, after requiring 2 ½ years to completely re-work it, the book came out--to very poor reviews. One reviewer even said it was clear evidence that the author was of “the drug culture”. It was not until it was chosen as a Caldecott Honor Book that it was seen as the creative and fascinating book it is. 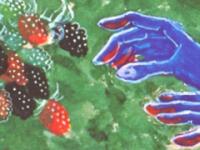