Duffy and the Devil 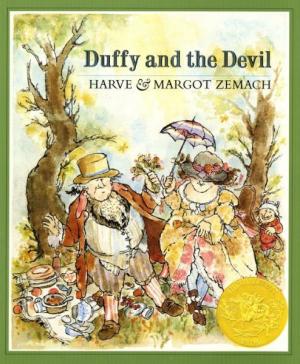 written and illustrated by Harve and Margot Zemach

A Cornish tale reminiscent of the traditional Rumpelstiltskin story; winner of the 1974 Caldecott medal.

A young maid named Duffy comes to Squire Lovel's manor to help the old housekeeper spin and knit.  But there's a problem: she doesn't know how to do either!  In frustration, she calls out, "The devil can make Squire Lovel's stockings for all I care!"

The devil appears and makes a deal with Duffy.  He'll spin and knit all she wants, but he'll take her away if she can't guess his name by the end of three years.  Duffy gains fame throughout the countryside for the fabulous clothes that the devil makes for the Squire.  Finally, the Squire marries Duffy and they live happily for a while.

As the end of the three years approaches, Duffy remembers the deal and begins to panic about being taken away by the devil.  With help from the clever, old housekeeper Duffy calls the devil by his name on the final day and the enchantment is broken - with some amusing and unexpected side effects.

Zemach's characteristic watercolors do a wonderful job of capturing the humor of the story.  Duffy is not depicted as a beautiful, innocent girl but as a plump, young woman with more luck than sense.  The Squire is not greedy or selfish, but kind and sympathetic to his servants and subjects.

After reading, discuss and compare other versions of this story others may have previously heard or read. Explain that Rumplestiltskin-like stories have appeared in different time periods and cultures around the world. Similar story patterns appear in Tom Tit Tot or Duffy and the Devil from England or Whuppity Stoorie from Scotland among others.The tale was popularly noticed when collected by the Brothers Grimm in their 1812 edition of Children's and Household Tales but according to researchers it may have originated as many as 4,000 years ago.

As a group develop a list of elements that make a tale a “Rumpelstiltskin” story. These may be easier to understand if posed as questions such as:

Choose 3 or 4 books and compare the content of each with regard to the discussed story elements.
For example, in different versions the villain is named "Rumpelstiltskin" – "Whuppity Stoorie" – "Tom Tit Tot" – the "Devil" - "Lit'mahn Bittyun".

After completing and discussing the comparisons have each participant draw and color a scene from their favorite version.